In a statement to The Hollywood Reporter, Madonna writes:

“I’m very sorry to hear about Marks death.
I haven’t seen him for years but if it weren’t for him, I might not have had a singing career.
He was the first DJ to play my demos before I had a record deal.
He believed in me before anyone else did.I owe him a lot. May he Rest in Peace.” 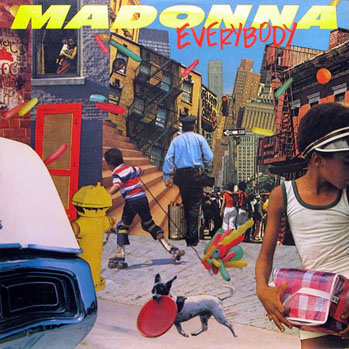 A fixture in the downtown New York City scene of the early 1980s, he held court at Danceteria and produced the Queen of Pop’s debut single, “Everybody.” Says Madonna in a statement to THR: “He believed in me before anyone else did.”

Pioneering DJ and producer Mark Kamins, who was instrumental in facilitating the signing of Madonna to Sire Records in 1982, has died. According to BlackBook, on Feb. 14, he suffered “a massive coronary” in Guadalajara, Mexico, where he has been teaching. Word spread on Facebook, where many friends of the Downtown New York City scenester posted remembrances. The particular poignancy of his passing is surely the marking of the chronology of those connected to the incipient development of the biggest musical star of our time — the mortality surrounding the cultural immortal that is the Queen of Pop.

In a statement to The Hollywood Reporter, Madonna writes: “I’m very sorry to hear about Marks death. I haven’t seen him for years but if it weren’t for him, I might not have had a singing career. He was the first DJ to play my demos before I had a record deal. He believed in me before anyone else did. I owe him a lot. May he Rest in Peace.”

Kamins, noted for always living his life in the grandest of fashions, had apparently been struggling with heart problems for some months.

Legend has it that he took the budding superstar and clubland habitue Madonna Ciccone under his wing, passing her demo on to Sire Records honcho Seymour Stein, who quickly signed her — the rest, of course, is pop history. Kamins, who also produced her nascent single “Everybody,” would be the first in a line of high-profile Madonna beaus, eventually to be usurped by the likes of Jellybean Benitezand, of course, many others. A significant talent in his own right, he went on to work with radical performance artist Karen Finley, as well as 80’s musical giants such as David Byrne, the Beastie Boys and Sinead O’Connor.

Benitez wrote on Facebook: “So sad to learn of the passing of Mark Kamins … I will never forget the first time we met and how much we laughed … I also loved watching and listening to you DJ at Danceteria … I never knew what you would play next … U are and will always be an inspiration to many … I will miss u … Rest in Peace my friend.”

Downtown documentarian Steve Lewis writes on BlackBookMag.com that Kamins “was brilliant yet lost, a good friend but often very much a loner. I DJ’d with him at subMercer a couple years back and it was just about the most fun I’ve had at that game.”

Kamins perhaps distinctly represented a lost New York club scene of debauchery and illicit behavior, replaced now by bottle service and bankers. A fixture at the legendarily uninhibited Danceteria, where he mingled not only with the soon-to-be Material Girl, but also with downtown icons Keith Haring, LL Cool J, and the Beastie Boys, his remixes included superstars of the time like Kajagoogoo and Ofra Haza.

Seemingly universally loved for his benevolence, he was memorialized in a posting by friend Marci Weber on Facebook: “Mark was a friend to so many people and always had a good story. He was a kind hearted generous man and always had time for his friends. He lived life to it’s fullest and perhaps that is why he left us so soon.”

His legacy is secure as a central figure of one of New York City’s most fertile and experimental periods in terms of music, clubbing and lifestyle iconoclasm.

Exact details of Kamin’s passing were not known by press time. He is survived by a son.